On the Schunemunk trail guide, friendly hiker Will recently posted this comment:

“Really interested in a lot of the hikes you post. However, my wife is VERY scared of snakes. I am a bit concerned at all of the talk of rattlers in the Hudson Valley. Any suggestions as to how to calm her about the snakes? Additionally, we have a 50 lb yellow lab (mostly off leash) who hikes with us. Do you ever get nervous having your dog hiking with you with the rattlers around?”

Scrolling further down the comment section, you can see why Will’s wife might have snakes on her brain, and why she and Will didn’t find the rest of the comments to be a very calming influence.  Here are snippets and pictures from those comments:

“It wasn’t very crowded at all and the views were amazing. We also ran into a Timber Rattlesnake on the dark hollow trail. We will be back!” 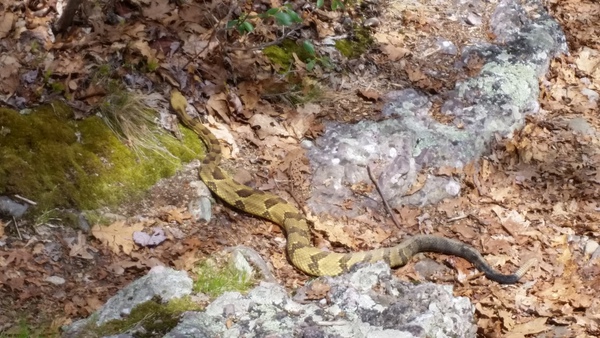 “We encountered a 3+ foot timber rattlesnake on the way down the black trail near the top.” “We saw one too! And thank you Mike for the wonderful directions and tips. We loved this hike!” And for the doozy of them all, head over to the Mt. Alander trail guide for this comment from Jeff Barber on September 2, 2018:

“I took a group on this loop today (September 1), and was rewarded with the privilege of seeing SEVEN timber rattlesnakes all in one place! It was really something!” Really something, indeed!  Something that would make most hikers pee in their synthetic pants.  (At least they’d dry quickly.)

Looking back over these comments, though, I’m struck at how psyched most of these hikers are about their encounters.  They all almost stepped on one of nature’s landmines, and they each sound like they’d be psyched to go back and do it again.  Hikers are a hearty bunch.

So there, Will.  Just tell your wife it’s all about her attitude.  Stay positive!  When life gives you venom, make venomade!  Problem solved.

But seriously, I do share her rattlesnake-fear, as do most hikers.  In fact, I tend to obsess a bit over this very topic, especially after my own run-in with a rattler on Brace Mountain.  The rattler was in the grass just beside the trail.  It was silent when my (cough cough off-leash cough cough) dog trotted by.  It did rattle at me a few moments later, though, and it was easily within striking distance.  But it chose to rattle, not strike, just as everyone who has experience with these reptiles will tell you that they prefer to do.  He then unfurled himself across the trail a moment later, allowing me to grab a picture. Eastern timber rattlesnakes (the only rattlesnake species in this area) have a reputation for being docile and non-aggressive, as far as rattlesnakes go.  They are apparently the yellow lab of the pit viper world.  Look how cuddly!

To try to have a fact-based exploration of the topic, I’ve combed the internet (where facts occasionally reside) to find tidbits that would either be enlightening or calming to local hikers, and I’ve found some of each (mostly of the calming variety, with one notable exception):

Besides the tragic incident at Minnewaska, I can’t find any news-making run-ins between local hikers and eastern timber rattlesnakes.  And while it’s easy to fixate on the dangers of rattlesnakes when the chances of seeing one, let alone getting bitten by one, are vanishingly, infinitesimally small, let’s not forget: there are copperheads out there, too.  At least in the lower Hudson Valley.  (They are the only other kind of venomous snake in the area, and are apparently not found in the upper Hudson Valley.)

Here’s a shot and comment that Brendan shared on April 22, 2017 on the Mt. Alander trail guide, which I believe is the only copperhead picture that’s been shared on the site to date:

“I’m actually hoping to come across some rattlers to photograph; has anyone come across them this early in the season? Just for fun, I’ve included a photo of a copperhead I took last week in Connecticut.” Beautiful shot, Brendan!  I hope that lens had some good zoom on it.

According to Wikipedia, “The copperhead accounts for more cases of venomous snake bite than any other North American species; however, its venom is the least toxic, so its bite is seldom fatal.”  So we’ve got that going for us!  Which is nice.

The only news I could find on copperhead bites in the area was in this Times Herald-Record article from 2001: “First copperhead bites in years a surprise to experts.”  That article contained this money quote from a nurse at St. Francis Hospital, describing what can happen when a copperhead bite prevents someone’s blood from clotting: “People can start leaking blood from all sorts of body parts.”

Hiking is a popular pastime for many reasons, but leaking blood from all sorts of body parts is generally not high on the list of preferred outcomes.

However, the article goes on to quote a DEC snake expert who says, “There is no record of anyone dying from a copperhead bite, including children.”  That is comforting!  Will, you can just tell your wife that while hikers might occasionally leak blood from all sorts of body parts, they almost always live to tell the story at parties.

Unfortunately, the article also goes on to refute the claim above that nobody has ever died from a rattlesnake bite in New York:

“The last person to die from a snake bite in the mid-Hudson was a Bronx Zoo reptile collector who was careless 30 years ago while trying to get a timber rattlesnake bagged in the Hudson Highlands. He scared another rattler — one he didn’t see — and it bit his hand.”

Hikers may take some solace in the fact that this bite happened to someone who was indeed messing with a snake he found in the wild, putting him squarely in the 98% of bite recipients who fit that description.

Hikers definitely wouldn’t take solace in reading this macabre Wikipedia page I just discovered, though, that lists every snake bite fatality in the United States over the past century, with a brief description of each.  Actually, maybe we can all take some comfort in the fact that there are very few hikers on that list, and only one person from New York, a non-hiking woman from Putnam County who was bitten by her pet black mamba in 2011 in a possible suicide. (There are also copperhead fatalities listed on that page, refuting the suggestion that nobody ever dies from copperhead bites.)

One other note worth mentioning from that article about copperheads in the Hudson Valley:

“Male copperheads and rattlers are on the move through August looking for mates, so they may be more likely to come across humans this time of year.”

I have definitely noticed a trend on this site that August is the most common time of year for people to report running across rattlesnakes.  It can happen at other times, too, but business picks up in late summer every year.

According to the very informative snake page on CatskillMountaineer.com, rattlesnakes around here will den from mid-October to mid-April, with 52 degrees being the magic temperature that will make them sleepy.  So if you’d like to hike in the Hudson Valley with the lowest possible likelihood of seeing a snake, a nice brisk November day would be a great time to do it.

I would also note that from an anecdotal perspective, I’ve taken hundreds of hikes in the area, and have seen maybe four snakes.  Usually, a snake sighting looks like this (taken on Mt. Stissing): Or maybe this (taken on Mt. Beacon): So where does that leave us, Will?  I’m not exactly sure.  I’ve tried to dump every personal anecdote and piece of local information I could find to help you make an informed decision for yourself.

My personal opinion is that it would be more harmful to my (and my dog’s, and my family’s) physical and mental health to sit on the couch instead of going hiking, and I’ll accept the so-miniscule-as-to-be-nearly-non-existent risks of a negative snake encounter.  (Indeed, most snake encounters reported across this site are of the positive variety, with people being stoked about seeing such beautiful and powerful little creatures.)

I probably wouldn’t take my loved ones to Mt. Alander or Schunemunk in August, at the height of snake-activity season, just to err on the side of caution.  To let you in on my decision-making process, I have Mt. Tremper high on my to-do list.  The CatskillMountaineer trail guide for Mt. Tremper devotes quite a few pixels to warning about the nearby rattlesnake den, rating the rattlesnake risk here as “high.”  It also mentions the view from the top being partially obstructed by trees.  The solution to both of these problems will be visiting during cold weather, after the leaves are down and the snakes are snoozing.  I hope to get out there sometime in November.

So that’s my long answer to your short question, Will.  There are indeed some real and very low-probability risks, but with millions of hikes taken in the area over the past several decades, there appear to have been very few problems out there.  To me, the much greater risk would be missing out on the magical experiences to be had while hiking in the Hudson Valley.

How’d I do, everyone?  What advice would you give to Will and his wife?  Have you had any memorable experiences with snakes in the Hudson Valley?  Please share your thoughts in the comments!

**UPDATE August 2021** Unfortunately, the streak of “no hikers bitten” has been broken.  Here’s the headline from Harriman State Park last summer: Woman rescued, flown to hospital after rattlesnake bite in Rockland County.  (Click the link to watch the local news story, with footage of the airlift.)  It happened to a 25-year-old hiker, who was expected to make a full recovery.

While we’re at it, I’m afraid I also stumbled across this headline recently: Venomous snake bite lands New Jersey man in the hospital.  This one was a copperhead, also biting a hiker.  It happened at Baldpate Mountain in Titusville, New Jersey.  Totally not in the Hudson Valley!  So, you know, that should make us feel better, right?  This hiker was using his phone as a flashlight, and didn’t notice the snake until it had already bitten him.  The Harriman bite reportedly happened around 9pm – perhaps a similar circumstance?  I don’t know if any additional lessons can be learned from either of these unfortunate events, but at the very least, investing in a really good headlamp or flashlight if you’re going to be hiking in the dark (already a great idea) seems not at all optional.

Also, my wife almost stepped on a young copperhead last fall.  She jumped over it at the last second, and it didn’t react at all.  Thanks for being nice and/or having bad reaction time, little copperhead!  (More details and photos can be found on the Castle Craig trail guide that I wrote about that hike.)  Nothing else happened other than me taking some pictures of it, but it seems worth mentioning here.  That was the first copperhead I’ve ever seen in the wild.  (And while they are beautiful snakes, if it was also the last, I’d be okay with that.)

Step carefully out there, everyone!